10 Ghz is the most popular microwave band by far.  3cm was my 1st microwave band I got onto way back when.  I made some Gunn diode gear from an article 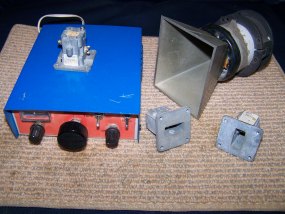 in ARA and had good fun playing with those.  I also had 3cm ATV for many years, again using a Gunn diode on transmit and a modified Ku band LNB for receive.

3cm is made for portable setups.  Small dishes have heaps of gain.  And even a small horn works very well. Most new comers to microwaves decide on jumping in at 3cm for their 1st band as they know there are a few guys around who are active. And that is exacty what I did!

First off I got myself a DEMI low power kit.  All pipecaps and fiddly as to build as I had never worked with pipecaps before.  And it was made a bit harder without test gear.  This one had the DEMI crystal miroLo LO and stable it wasn’t.  I drove to Sydney to  VK2TRF Jack’s to have him put it on his test gear and was glad to be told that it works.  Then Jack headed out with his gear a couple of Km away and I had my first NB 10 GHz contact with all of 10 mW.  Since then I have replace the microLo with a A32 PLL LO and purchased from DEMI the 3 Watt model. 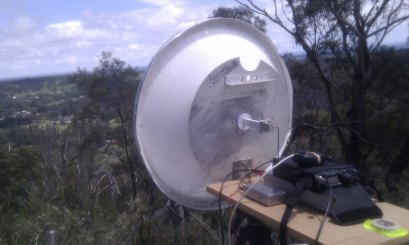 I have a 60cm prime focus dish from an old Mitec video link.  Very light-weight and with this mounted on a camera tripod with a pan/tilt head makes aiming a breeze.

The feed is the original shepherd’s hook that came with the Mitec dish.   Can have it out of the ute and setup in a couple of minutes.