Have now order Kuhne gear.  This will give me a known working transverter that will give me the bench marks I need to tune up my harmonic mixer setup a bit better then they are now. 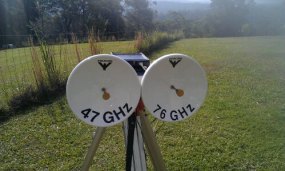 Kuhne 47 GHz transverter built and tested.  I will put the DL2AM 76 GHz transverter in the same case and then when 47 GHz is aimed I’ll be fairly close on target when I switch over to 76 GHz.

On it’s first outing I worked VK2GG at 35km.

Best distance worked to date is VK2CU at 40km. 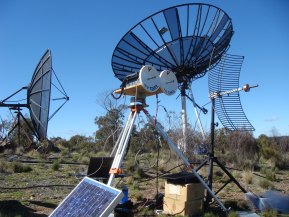 My original 47 GHz gear was a bit of a nightmare.  After reading SBMS harmonic mixer info several years ago I figured “grrr to much plumbing”. But last year Alan VK3XPD wrote some articles on his harmonic mixers And I saw that I had most of the gear laying around here to have a go at building something up. 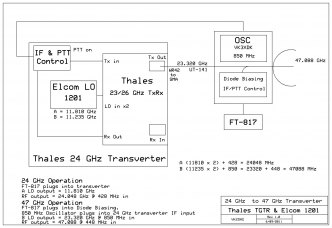 I had a faulty Thales 26 GHz transverter that would only work in transmit, and so I reasoned that if I made it work on 23 GHz I could use that as the LO for my harmonic mixer to produce 47 GHz.

Add in a VK3XDK LO and an Elcom oscillator to produce the 23 GHz and lock it in transmit.

My 70cm IF tap is a bit different to Alan’s.  I thought it would be a bit easier to build it up around an SMA three way Tee connector.

Alan gave me some small dishes that are a very deep 0.25.  And I have been testing with these fed with a conical horn.  I have only made a QSO of a couple of hundred metres so far.  But the setup/break down is not very repeatable.  Each time the feed moves an uppthteen of an inch the performance drops off.  When 6mm is whole wavelength it doesn’t take much movement to throw things out of whack!

Best distance with this gear is a very sad 300m!! 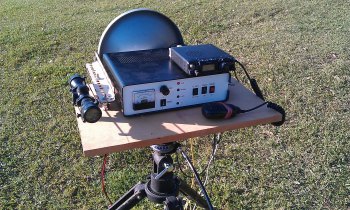 But wait there’s more….  Justin VK2CU has just picked up a set of 50 GHz NEC Pasolinks.  Little bit of work and these will play quite nice on 47 GHz with a respectable 10mW. 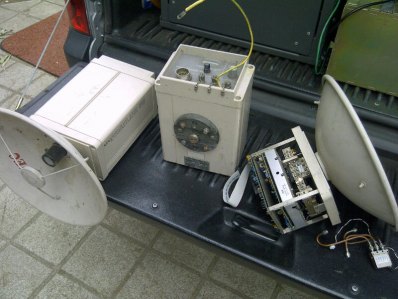